My father pointed out to me a while back that the fence on my miter saw was not straight. We tried with great effort to straiten it but the metal is just too ridged. 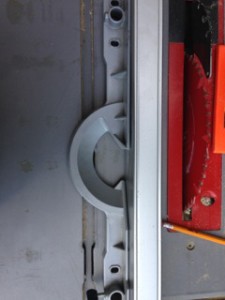 With all of the work we have been doing on the house I had a lot of trim I was going to need to cut so doing it by hand was not really a good option. And using the existing fence was going to make it near impossible to be consistent with the cuts. So I decided to build a new one. 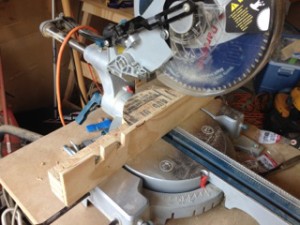 This is really just a prototype before I make a more permanent solution. I was able to put it together in an hour or so with some scrap wood I had laying around and a quick trip to the store to buy longer bolts for fastening it down.

First I made some measurements on the saw to determine what the max depth of the fence could be. The more depth the more stable the fence will be since it is made out of wood after all. Next I cut 3 strips of chipboard to the same length and width. Then I glued this boards together and not wanting to wait for them to dry I fastened them with some two inch nails from my nail gun. Next I used my table saw to make sure both faced were flush. I cut a similarly sized strip of plywood and glued and nailed it for the fence face. I used the old fence as a template to mark where the holes should be drilled and then drilled them. Finally I determined what the radius of the pivot is and used a jig saw to cut clearance into the new fence. 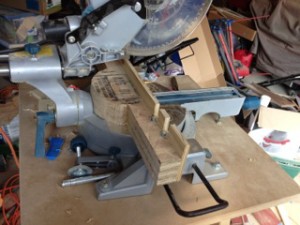 There were a few issue that I ran into. First as you can see the holes for the bolts are so close to the fence face that I had to make some notches to accommodate the bolts and washers. Also the chip board is really not a solid enough material and tightening the bolts down created indentations and bending of the washers. Finally, and this was just poor planning, I nailed the fence face in places that I ended up drilling and cutting into which isn’t too big of a deal as far as keeping the face attached but did create some sparks the first couple times I cut into the fence. 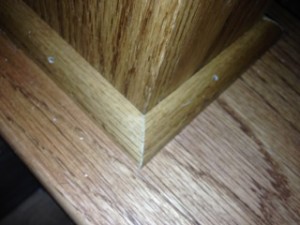 Overall I would say the results speak for themselves. There is no way I would have been able to make such tight joints with the fence that came with the saw. No wonder WEN doesn’t seem to be making this saw anymore.