The other day my daughter asked me if there were any games for XBox that she would like (I have an XBox 360). She is really into horror movies and scary stories right now and as it so happens I was recently watching a play through of the game Until Dawn. Until Dawn seemed like the kind of game that would be perfect for her since it is pretty much a playable horror movie. This all got us talking and I started thinking about a lot of the games that I would like to play. I guess we talked about it enough that my wife even tried to buy the PS4 Arkham Knight bundle for me the next day, but every store was sold out. After some searching I found a store that still had one so my daughter and I made a last minute, late night trip to pick it up. 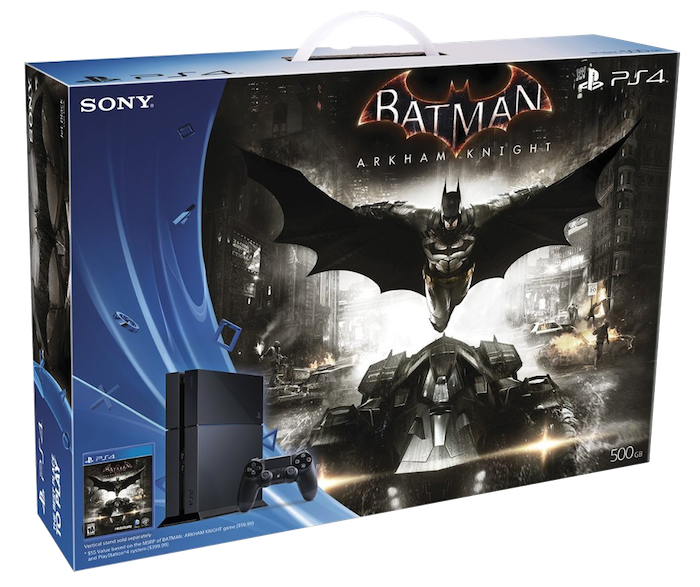 This is my first PlayStation since the PS2, which I got when it was really cheap and mostly just for a couple PS2 games and some PS1 games. I have to say so far I am very happy with the PS4. The picture looks great on our 60” 4K Sony Bravia. It is quieter than the 360, though I think it gets too hot in the location we have it so the fan runs a lot.

There are a couple of features that I am particularly excited about. First, the fact it plays Blu-rays natively is refreshing from the 360. Next, the sharing functionality it really cool. Being able to hit a share button at any time and then share the last few minutes of game-play is awesome. I think it will take some getting used to for me to remember to use it when cool or crazy stuff happens in game, but I am looking forward to sharing some content on YouTube. Finally and probably more than any other feature, I am excited about being able to play full game audio wireless to headphone via the controller. It may seem like a small feature, but in a house full of children and a tired mother being able to play games with no sounds filling the air is fantastic. It means I can actually enjoy the audio content of the games I play instead of just reading the subtitles. And this is great for not just games, being able to watch Netflix or Amazon Prime using this feature is going to be great too.

Overall I would say I am happy with the purchase. I really don’t find myself compelled by the XBox One. There was a lot of release drama associated with the system and I am not really interested in their “one system for all your entertainment” approach. History and shown me that MS in particular is not great at doing a lot of things well, most companies aren’t. I would rather just have a console that is great for playing games and leave it at that, and PlayStation seems to take a “games first” approach. Hopefully I will be able to find some time to play it between all of the other more important things in my life, including sleep.